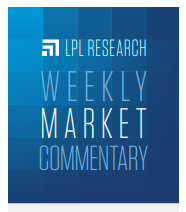 Rising interest rates and trade war fears were cited as the primary causes of the sell-off that caused the Dow Jones Industrial Average to drop more than 1300 points on Wednesday and Thursday combined. Concerns about corporate profit margins peaking and a potentially overcrowded tech trade also likely played a role in upsetting a market that had been extraordinarily calm over the past six months. The S&P 500 Index did manage to pare losses, thanks to solid gains on Friday, but still ended the week down over 4%, for the worst week since March. Here we share some perspective on the latest bout of market volatility, which is not particularly unusual, and share our thoughts on where stocks may go from here.

This volatility should not be all that surprising, for a number of reasons. Going back to 1950, no month has seen more 1% changes in the S&P 500 (up or down) than the month of October. Stocks were coming off of one of the least volatile third quarters in many decades. Last week’s slide means the S&P 500 has endured three pullbacks of 5–10% this year, which is in line with the long-term average.And, volatility ahead of elections is not unusual. In fact, ahead of the November 2016 presidential election the S&P 500 fell nine consecutive days—one of the longest losing streaks ever. So while pullbacks are unwelcome, they are a normal part of long-term investing. One of our favorite charts highlights this point [Figure 1]. The S&P 500 has produced a positive total return (with dividends) in 33 of the past 39 years going back to 1980. During that period, the average maximum peak-to-trough decline in the index was 14%. Even during positive years, the average maximum drawdown in the index was 11%. The correction in January and February of this year was about 11%, right in line with the average correction during positive years. We obviously don’t know where stocks go from here, but at this point we would say that last week’s volatility is not particularly unusual.

WHERE DO WE GO FROM HERE?

Looking ahead, we see a number of reasons to maintain our positive U.S. stock market outlook:

We are entering a favorable seasonal period. Over the four-year presidential cycle, the current quarter and the next two have historically been the best. The average 12-month gain off midterm election year lows is over 30%, and since 1946 the S&P 500 has never been down over the 12 months following midterm elections (18 for 18). In general, fourth quarters are the best quarter of the year for stocks, and the historically best six-month period for stocks starts November 1.

The U.S. economy is in excellent shape. Consumer spending is growing solidly, consumer and business confidence is high, the job market is quite strong, manufacturing surveys are near record levels, and, by historical standards, interest rates are still fairly low. All of our favorite leading indicators point to continued economic growth, and we see only early signs of excesses that have ended past economic cycles, such as excess leverage, overspending, or extreme overconfidence. Even the yield curve has steepened some in recent weeks, a positive signal.

Corporate profits remain quite strong. S&P 500 earnings are expected to grow 21% in the third quarter based on FactSet consensus estimates, supported by strong U.S. economic growth and tax cuts (see our latest blog on www.lplresearch.com for an earnings season preview). Third quarter estimates held up relatively well during the quarter, a positive sign, and tariff impact has been minimal to date.

Stocks and interest rates can rise together if… stronger economic growth is driving rates, as we believe is the case now. When rates spike over a short period of time, as in the “taper tantrum” in 2013, volatility usually spikes as well. However, we think much of the increase in interest rates is now behind us and additional moves higher should be gradual, which should enable stocks to settle  down in fairly short order. Despite losses in many fixed income sectors this year, we continue to believe bonds can play important roles in portfolios as diversifiers. Despite tough rhetoric from both sides, we see a a U.S.-China trade deal as likely. Though a deal will not happen until after the midterms, we believe the two parties have too much to lose to not find middle ground. Regardless, the amount of fiscal stimulus put into place in the U.S. this year should far outweigh the dollar amount of tariffs either implemented or threatened. 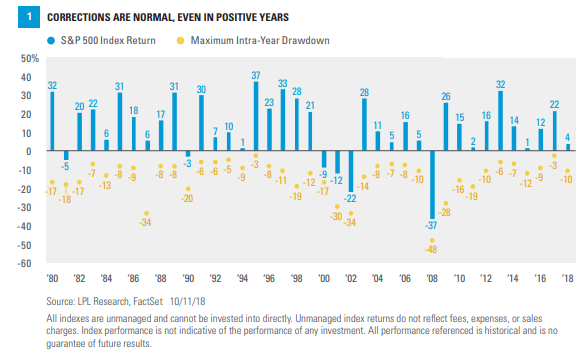 ARE STOCKS WASHED OUT?

Last week we were asking ourselves an important question: Was the volatility dramatic enough to be considered capitulation? After a 5% drop in two days, we see several data points that suggest stocks could potentially be at or near lows. For starters, since the Brexit vote in June 2016, the S&P 500 has found support multiple times right at its 200-day moving average. As Figure 2 shows, the S&P 500 is near this important trend line once again. Although we would prefer the S&P 500 stay above this trend line, history tells us the trend’s direction is more important. Fortunately, it is still pointing firmly higher, which bodes well for an eventual continuation of the bull market. 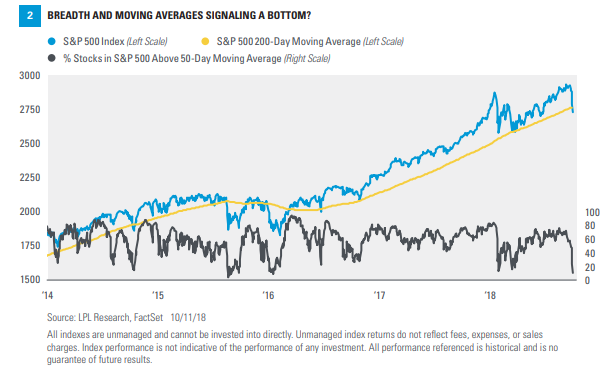 From a technical analysis perspective, how much damage was done during last week’s sell-off? Well, as Figure 1 shows, only 11% of the components in the S&P 500 closed above their 50-day moving average after Thursday’s sharp decline—meaning 89% did not. This was the lowest level for this metric since early 2016. Additionally, the 14-day Relative Strength Index (RSI) on the S&P 500 hit its lowest level since August 2015. This popular momentum indicator, which measures overbought and oversold conditions, provided yet another clue that last week represented potential capitulation, or a washout, for stocks.

Some popular sentiment measures indicate investors have turned very bearish, which is what we want to see from a contrarian point of view:

Bottom line, we think investor sentiment measures reflect enough pessimism to suggest stocks may be near a bottom.

Given the market’s steady advance over the past six months and historic lack of volatility, a pullback was probably overdue. Volatility never feels good, especially when it has been a while since investors have experienced it. But it is a normal part of a bull market entering its latter stages. Though it is certainly possible this sell-off gets worse before it gets better, our belief is that it is unlikely to develop into a bear market. We maintain our S&P 500 yearend fair value target of 2900–3000 (the S&P 500 closed at 2767 on Friday).

We encourage investors to view the recent market volatility as an opportunity to reassess portfolios and look for spots to either deploy cash or rebalance to longer term allocation targets, where suitable. If you are over-allocated to growth, particularly in the mega-cap technology arena, this may be a good time to consider rebalancing. More active strategies on the part of investors may be required to pursue long-term goals. For long-term investors, volatility should be embraced, not feared, especially against a backdrop of solid fundamentals.

Investing in stock includes numerous specific risks including: the fluctuation of dividend, loss of principal, and potential liquidity of the investment in a falling market.

Because of its narrow focus, sector investing will be subject to greater volatility than investing more broadly across many sectors and companies.

All investing involves risk including loss of principal.

The modern design of the S&P 500 stock index was first launched in 1957. Performance back to 1928 incorporates the performance of the predecessor index, the S&P 90.

All information is believed to be from reliable sources; however LPL Financial makes no representation as to its completeness or accuracy.

This research material has been prepared by LPL Financial LLC

To the extent you are receiving investment advice from a separately registered independent investment advisor, please note that LPL Financial LLC is not an affiliate of and makes no representation with respect to such entity.